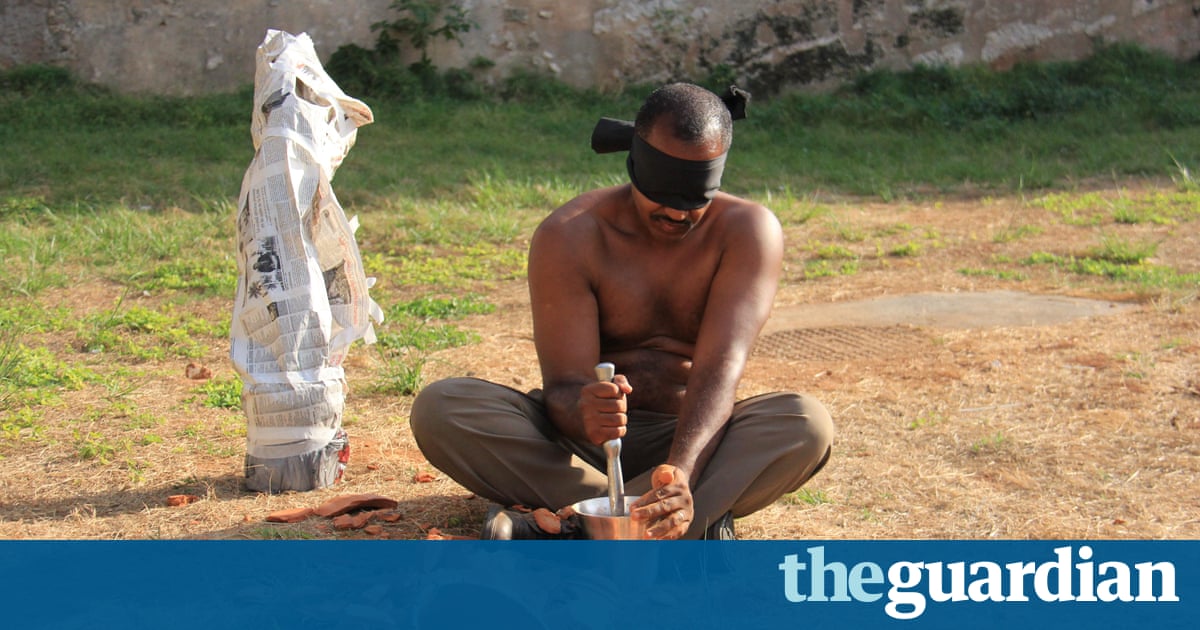 Wearing black at an exhibition opening usually goes unnoticed but here in Brazil, the black-clad artists at Latin Americas most important contemporary art exhibition knew how to make a stir. On the preview days of the So Paulo Biennial, more than a dozen artists milled through the galleries in custom black T-shirts, whose blunt slogans brought the countrys filthy politics into Oscar Niemeyers airy white pavilion. EU QUERO VOTAR PARA PRESIDENTE, read one: I want to vote for president. Another said DIRETAS J, Elections now, a reboot of a chant from the last days of the dictatorship. The most popular was the frankest: FORA TEMER, a call for Brazils newly installed president to jump into Braslias manmade lake.

The 32nd Bienal de So Paulo, which opened to the public this weekend in this glorious mess of a megacity, is the oldest such art exhibition in the world after the Venice Biennale. Its a halting, tentative, exploratory show and its hesitancy may be a natural response to the wild gyrations of this country, upended by a one-two-three punch of political, economic, and medical crises. Days before the exhibition opened, the twice-elected president, Dilma Rousseff, was bounced out of office by a political class far more corrupt than she. The continuing mega-scandal uncovered by Operao Lava Jato (Operation Car Wash) the largest graft probe in Brazilian history, which has revealed dumbfounding corruption across the countrys political and business elites has been pushed off the front pages by Rousseffs ouster, and the new Temer government is accused of attempting to smother Lava Jato for good. Whether or not you agree with the artists here who speak of Rousseffs impeachment as a coup, the replacement of Brazils first female president with a despised politician of another party has dealt a grievous blow to this still young democracy, and given a new cast to the biennials title, Incerteza Viva (Live Uncertainty).

The show features a substantial number of African artists, including the young Zimbabwean painter Misheck Masamvu, whose splotchy, color-soaked abstractions display a roiling anxiety. Afro-Brazilian artists are well represented too. Dalton Paula, one of Brazils most promising young painters, has festooned dozens of ceramic vessels with imagery drawn from Latin Americas colonial history: missionary classrooms, celebrations, funerals, all depicted in a naive style that offsets black skin with white clothing.

Paulas unadorned, unpretentious ceramics are among this shows many humble gestures. Jewels you can find at the after-parties; prepare here for acres of dirt. The Australian artist Susan Jacobs interrupts a pile of raked earth with a spill of molten gallium. Dineo Seshee Bopape, from South Africa, displays tightly packed cubes of soil decorated with hieratic symbols and embedded with herbs and clay. More packed earth courtesy of Erika Verzutti, one of Brazils best sculptors, whose wall-mounted blocks of brown are scored with slices, divots and pockmarks. Lais Myrrha, also from Brazil, has erected a three-story tower of dirt, timber and straw next to another of metal and concrete: an occupation of Niemeyers high-modern pavilion with cheaper, rougher architecture.

Myrrhas giant twin towers are only the largest of many projects here to look at indigenous Latin America and at alternatives to the big bad city. Sometimes its done sympathetically, as in the ethnographic films of Vdeo nas Aldeias, a collective from Pernambuco that encourages indigenous Brazilians to document their lives. Too often, though, the show dips into heal-the-world pieties, back-to-nature hippiedom and spiritualist bunkum. The young Scottish artist Ruth Ewan has gathered hundreds of plants, rocks, bones, and tools associated with the French Republican calendar, pitched here as a critique of modern timekeeping. Jorge Menna Barreto has occupied the pavilions restaurant and make it vegan-only; I tried to order a coffee with milk and was duly humiliated. Eduardo Navarro of Argentina has pierced a window of Niemeyers pavilion with a giant ear trumpet, so you can have a conversation with the palm tree outside. I didnt hear anything, but perhaps I am dead to interspecies communication.

Nearly half a floor of the biennial is dedicated to such paranormal visions as Gilvan Samicos occult engravings of stars, snakes, and mermaids carrying the sun; the intricately abstract energy diagrams of Kathy Barry, from New Zealand; or else a yoga-inspired video of nebulating clouds of blue and pink from the San Francisco visionary Jordan Belson. Those of us who are stuck on the international biennial treadmill will note that this crystals-and-mediums stuff has been going around for a while. Both the 2013 Venice Biennale and the 2015 Istanbul Biennial pulled the same trick, employing the last centurys world spirituality as a balm for this ones miseries. (The interspecies schmoozing has trended lately too: if you missed the episode in 2012 that saw curators musing over voting rights for strawberries, consider yourself lucky.) At this very fraught So Paulo biennial, though, the New Age sympathy has a local cast. If the utopian designs of an earlier age of Brazilians has soured and, indeed, Niemeyers own presidential palace in Braslia is now occupied by a corrupt usurper then maybe a different, less European kind of utopia deserves a look.