Aside from chicken pasta dishes being almost unheard of in Italy, this meal served to the prime ministers key staff during election planning in February is a carb-on-carb car crash 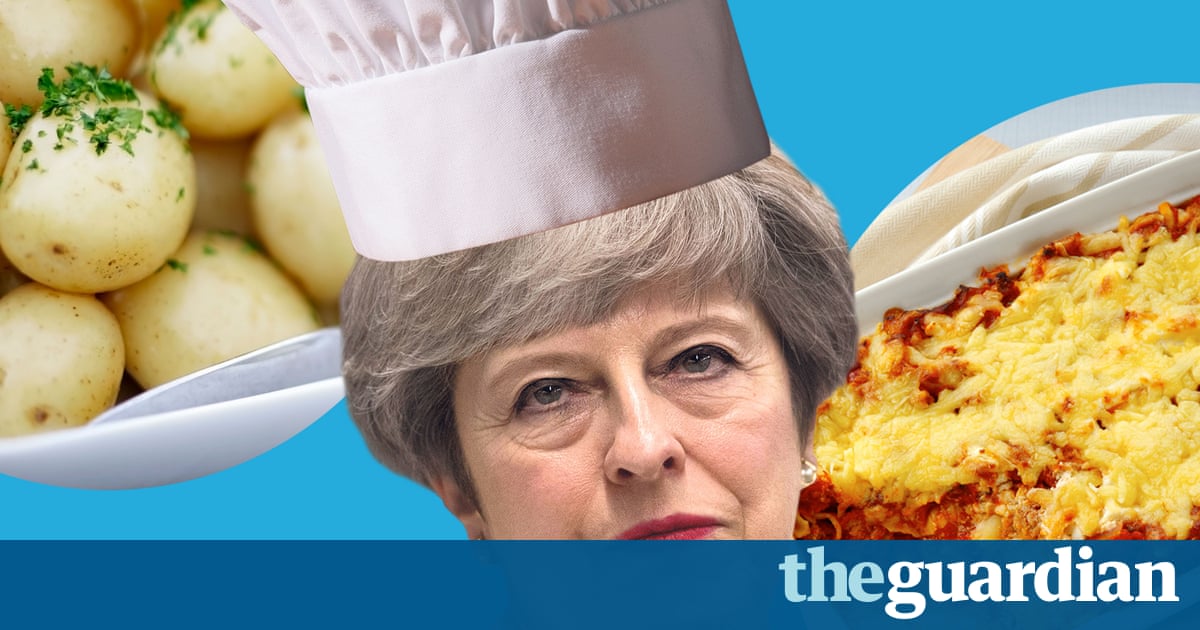 If you needed further proof that Britain has given up on the European project, you can’t get much better than the lunch the prime minister served her top brass at Chequers in February, as they plotted their election strategy, as described in a new book about the 2017 campaign, Betting the House, by political correspondents Tim Ross and Tom McTague. Chicken lasagne and boiled potatoes – as Lynton Crosby apparently quipped, it is possible to tell a lot about a leader from the menus they serve. In this case, it is clear that Theresa May cares as little about respecting the culinary traditions of fellow Europeans as she does about the sanctity of fields of wheat.

Although chicken livers are often added to a beef ragu for richness, or sauces are made with chicken broth, chicken itself is very rarely served with pasta in its homeland, reserved instead for the main course, where it might be stewed alla cacciatora or roasted with garlic and herbs. The culinary legend that is Anna del Conte gives a couple of ideas for using up leftover roast chicken in her book of pasta – but never for lasagne – Marcella Hazan does not countenance putting the two together at all in her comprehensive Essentials of Classic Italian Cooking, and neither does that bible of cucina italiana, the Silver Spoon. Part of the reason is that chicken would historically have been expensive, but as a lean meat, it is still better simply roasted or grilled to bring out its delicate flavour.

The potatoes are a puzzle, too; February is too early even for Jersey Royals, so it can’t have been an expression of culinary patriotism, except perhaps in cleaving to the bizarre Anglo-Saxon custom of serving garlic bread with pasta – carb on carb, like a chip butty or a potato pie (both of which would have been infinitely preferable). Either way, the entire course sounds stodgy and dull, which some of the diners may have felt fitted the atmosphere well.

Food at Chequers is usually more traditional – British traditional, that is. David Cameron served the Queen and Prince Philip lamb, potatoes and vegetables, with bread and butter pudding for dessert (with the news that Samantha sometimes chews every mouthful 50 times to stay healthy, one hopes that the royal couple didn’t have a train to catch), while John Major plumped for salmon and Edward Heath honoured the monarch with roast sirloin of beef when she came for lunch with Richard Nixon.

The current PM is known to be a more adventurous cook, with more than 100 books in her collection, and has cited Yotam Ottolenghi’s marinated rack of lamb with coriander and honey and Diana Henry’s baked chicken with tarragon and dijon mustard as some of her favourites; she has even decided what to cook for Donald Trump if he ever shows up for supper (slow-roasted lamb shoulder). This makes me wonder whether the pragmatic May was making a deliberate point with her dismal menu – perhaps, in fact, she was just trying to prepare her team for disappointment. Humble pie and custard for afters, anyone?